Showing posts from March, 2019
Show all

By gcallah - March 30, 2019
My cats’ food boasted of being the above on its label. I understand the “wild” part: as opposed to farm-raised. By given the fact the salmon is chopped up and in my cats’ dishes, isn’t the “caught” part self-evident? There aren’t salmon who volunteer for that fate, right?
1 comment
Read more

It doesn’t look like such a terrible box to me The phony multiculturalism of secular liberals

By gcallah - March 28, 2019
What we get is a constant boasting about "tolerance," combined with a complete intolerance of anyone who is not... a secular liberal. They "respect" other cultures just to the extent those cultures conform to secular liberal principles. But if you are actually culturally different, for instance, they try to ban certain sexual expression in movies (Malaysia), or have arranged marriages (India), or or resist aborting your own children (much of Africa), or even pass a law secular liberals don't like, despite having supported similar laws just a few years before themselves (Indiana, North Carolina) then these "liberals" will hound, harrass, "educate" and boycott you until you think and believe exactly like secular liberals do.

This is a rival religion to all traditional religions, and it is completely intolerant of heretics.
Post a Comment
Read more

By gcallah - March 24, 2019
Doyle, Sayers, Christie, Marsh, Hammet, Rendell, James... why are so many of them women?
Post a Comment
Read more

“He has his own moral code“

By gcallah - March 20, 2019
I just overheard someone saying this in the park. Of course it is a common sentiment today, and of course it is complete nonsense: A set of rules you made up for yourself to follow are just a set of rules, not a “moral code.” Morality is universal, or it is nothing.
1 comment
Read more

Did they put the wrong arms with T Rex?

By gcallah - March 18, 2019
Cause that’s what it looks like to me: like maybe that was some little chicken dinosaur he just happened to eat, so the bones were always next to him?
1 comment
Read more

By gcallah - March 18, 2019
Every once in a while, make sure you run `docker system prune`.
Cause if you don't run it for a long time, and then you have to run it... well, let's just say I'm blogging because Docker has been busy the last five minutes or so.
Post a Comment
Read more

The only propositions we should believe in are those scientifically verifiable!

By gcallah - March 18, 2019
Of course, the titular proposition is not scientifically verifiable.

"Multiculturalism" as Cover for Ethnocentricity

By gcallah - March 15, 2019
"All cultures are of course ethnocentric and few are genuinely aware of the degree of their own ethnocentricity." -- Alasdair MacIntyre, Three Rival Versions of Moral Enquiry, p. 28

I suggest that few people today are as blind to their own ethnocentricity as our current liberal, secularist, globalist elite. (And, of course, it is their occupation of the high ground in elite institutions around the world that partially protects them from the consequences of their own blindness.)

I contemplate this fact today after having just received a letter, from the leader of a global, elite institution, exhorting "every single member" of the community to support hey highly contentious point of view, one rejected by maybe 90% of the people on earth. And it was mandatory for everyone to support this controversial view in the name of... tolerance and inclusion!

The "multiculturalism" of our elites means that they will happily enjoy the "exotic" dress, food and…
Post a Comment
Read more

GitHub is worried about bias against... 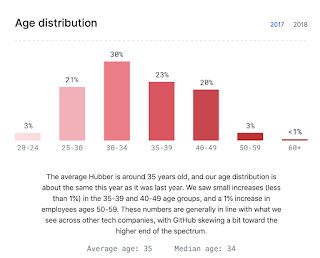 Their new report on diversity is extremely concerned that they do not have enough "non-binary" employees, but...

their population is wildly "young-skewed"... but who cares! No one is awarding SJW-points for worrying about age discrimination.

And GitHub, why not report on the religious distribution of your population, or the political distribution? Aren't you worried that, say, Republicans or Orthodox Jews might be under-represented?

Of course you aren't! You are working damned hard to make sure that conservatives and the religiously orthodox are under-represented!
8 comments
Read more

And we used to be a serious discipline.
1 comment
Read more

People who have nothing of importance to do...

By gcallah - March 12, 2019
tend to inflate the importance of the unimportant things they do.
Post a Comment
Read more

We Are Appointing the Mindless to the Supreme Court

By gcallah - March 12, 2019
Here: 'Justice Elena Kagan remarked, "Whenever someone expresses moral disapproval in a legal context, the red flag of discrimination goes up for me."'

Of course, Kagan is here expressing here moral disapproval of "discrimination," and in a legal context!

We she really means is, "As a liberal, I only approve of moral arguments framed in the language of liberalism and relying upon liberal premises."
Post a Comment
Read more

By gcallah - March 11, 2019
Look, the meaning of words change over time, and no language is ever permanently stable: I'm down wit all dat.

Acknowledging the above does not mean that one cannot judge certain language changes detrimental. So, for instance, the new, apparently required, use of "agnostic" as a substitute for "neutral" or "indifferent" is idiotic: we had those perfectly good words available to describe what people now mean when they say "Modern Monetary Theory (MMT) is politics agnostic": they mean it is neutral between political stances. So, we already had a word that precisely says what is meant: why, then, should we pick a word that suggests that MMT advocates aren't sure whether politics exists or not? Writers choose "agnostic" over the more accurate words in such situations only because "agnostic" is now trendy!

Something similar has recently gone on with the use of the word "transcendent": sportswriters these days re…
Post a Comment
Read more

I Struggled with the Decision

By gcallah - March 10, 2019
Andrew Sullivan has come out in favor of legalizing late-term abortions. The reason? "For all the women involved, this was unimaginably painful."

I've seen this before, and often on this very issue: they struggled with the decision, so therefore it is... well, what exactly? Not immoral? Immoral, but more OK than if they hadn't struggled with it?

But... what in the world does struggling have to do with the morality of the decision one reaches? So...

JUDGE: Did you rape those ten women?

DEFENDANT: Yes, your honor. But the decision to do so was incredibly painful.

By gcallah - March 09, 2019
If you see your friend destroying himself with alcohol, and you tell him to stop, doesn’t that make you an “alcoholicphobe”?
2 comments
Read more
More posts