Algorithms and Their Implementations

As I taught my students the Sieve of Eratosthenes, I described the sieve verbally, then I had them "run" the sieve on paper, then program it in Visual Basic. And as I did so, I contemplated, "What is the sieve itself, apart from its implementations?"

This of course is but one more version of the problem that Plato and Aristotle grappled with, on the relation of the forms to their particulars. Plato's approach was to regard the particulars as inferior "copies" of the forms, which tended to lead to a contempt for the world of particulars, and Gnostic ideas like the creation of the sensible world by an evil demiurge. On the other hand, Aristotle emphasized the particulars, leading him to posit a God who was so totally removed from the world that He did not even know it existed. 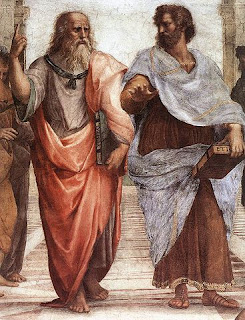 Somehow, this all reminds me of something, but I'm not sure what at the moment.