By gcallah - October 23, 2012
Nick Rowe characterized Lerner's position as: "You can't make real goods and services travel back in time, out of the mouths of our grandkids and into our mouths." And he claims this position is false.

So let us look at Bob Murphy "backing" up Rowe's position. He offers the following table: 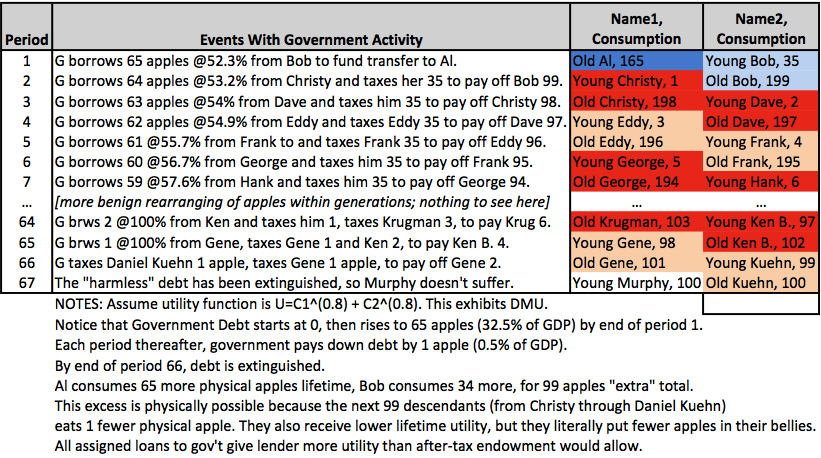 As I said, look. Look very carefully. How does Old Al benefit? He gets 65 apples from Young Bob, who is here in the present. Then Old Al dies. Therefore, every single further line of the table is utterly irrelevant to the welfare of Old Al! They have to be: he is dead. As far as Old Al goes, you can put your hand over the rest of the table. What we get is the surprising conclusion that, if we shift 65 apples of consumption from Young Bob to Old Al, Old Al is better off.

Now, Lerner clearly understood that such transfers could occur: "The real issue, and it is an important one, between the economists and Mr. Eisenhower is not whether it is possible to shift a burden (either in the present or in the future) from some people to other people..."

And what the rest of the table shows is that such transfers can keep happening in the future, as Lerner noted could happen, and they will keep having similar effects.

Now, one way to try to tie this into an anti-debt case is to note the voluntary nature of Young Bob's deal with the state: he agrees to give up 65 apples during P1 because he prefers 99 extra apples during P2. But, given that is so, Young Bob should be indifferent between that and a scheme that taxes him 65 apples during  P1 and (credibly) promises to transfer 99 to him during  P2. (Since either scheme at some point or other will involve taxes, a moral case against taxation is irrelevant.) I believe Steve Landsburg noted this when this debate first erupted, what, five decades ago? So I still believe my conclusion is sound: The effect on Old Al can be analyzed entirely in terms of period 1. He benefits from a direct transfer. Whether that is done by debt or taxation is entirely irrelevant to Old Al's gain. And, most importantly, given the irrelevance of the rest of the table to Old Al's situation, he did not benefit from any of those later transfers at all. He was, after all, pushing up daisies. Six feet under. Expired and gone to meet his maker. He is a late entitlement gatherer. A stiff. Bereft of life. Old Al is an ex-tax-recipient.

Now, the intuition that I think is driving the use of this model is "But look: If Young Bob didn't think he could get his apples back plus more, the thing couldn't get rolling. And he has to convince Christy of the same!" Well, of course Ponzi schemes are (by definition) unsustainable, and of course if this debt financing has been sold to citizens as a Ponzi scheme, there will be trouble down the road. (If the economy grows faster than the debt re-payments, per Samuelson, then the debt financing is not a Ponzi scheme at all, or, perhaps, per Rowe, is a "sustainable Ponzi scheme.") But as we well know, Ponzi schemes don't essentially rely on explicit debt contracts! It is the constant, growing transfers from investor generation N + 1 to investor generation N that characterizes a Ponzi scheme. So, once again, I conclude it is not the debt that is at issue in these OLG models, it is the inter-generational transfers.

And I conclude that Lerner's basic point was sound. In the entire table above, no real goods and services travelled back in time. Of course, Lerner understood that right this moment, I can eat my kid's desert. And next generation, my kid might do the same to his kid. And so on. And we don't need debt to make that happen!
government debt