Now What's a Wingnut To Do?

By gcallah - March 22, 2006
Michelle Malkin is upset about the Afghani government planning to execute a man for converting to Christianity, but understandably she is somewhat at a loss as to what to do about it. Usually she is eager to bomb anyone who looks at American interests cross-eyed, but in this case about the sternest response she can come up with is to "offer [the convert] asylum"! Well, I feel for her plight: She'd like to call for the US to invade Afghanistan, overthrow its government, and install one of American choosing, but of course America already has invaded Afghanistan, already has overthrown its government, and the offending ruling body is the very one that the US installed. Michelle must have spent hours at home wondering if it were nevertheless possible for America to invade again, what the status of the American troops propping up the current government would be vis-a-vis the ones trying to overthrow it, and other conundrums that finally left her looking like this: 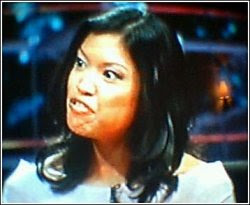