It Ain't the State

By gcallah - November 20, 2011
It's human nature. Courtesy of Ryan Murphy, here's a graph from Stephen Pinker's new book showing war deaths as a percentage of population: 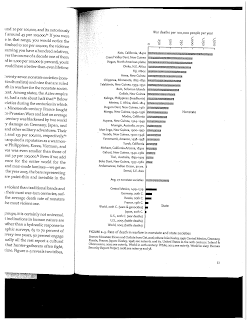 Incredible how many more people were killed in warfare in the absence of the state! The idea that eliminating the state will reduce violence is massively refuted by the evidence. "But," you complain, "that's not the sort of state-free society I envision: I envision one in which people will follow the non-aggression principle." Well, it's very nice to have visions. But there is simply no reason to think that, if the state is eliminated, ancapitopia is what will emerge. We have had many, many non-state societies in the past, and none of them turned into ancapitopia. And you know what? When you eliminate the state, by definition, you won't be in charge! In fact, I'll give you a hint who is really, really likely to take charge: whoever can organize a whole lot of violent force really quickly. And if no one can, there will be a bunch of people who could not quite succeed at this fighting each other.

Experience teaches anyone willing to listen that eliminating the state will produce a huge spike in violence. A bunch of wishful thinking is hardly counter-evidence!

Ed Feser: How Hume's "Problem of Induction" Only Arises Post-Descartes

By gcallah - July 07, 2012
Here : "As Ellis has put it, the early moderns replaced the Aristotelian notion of active powers with an essentially “passivist” conception of nature. For the Aristotelian-Scholastic tradition, by virtue of their substantial forms natural substances exhibit a directedness toward the generation of certain outcomes as toward a final cause. Efficient cause thus presupposes final cause or teleology, which in turn presupposes substantial form. Get rid of substantial form and final causality, and efficient causality in any robust sense -- any sense that entails an active tendency toward the generation of certain effects -- goes out the window with it. That is precisely why Hume’s puzzles about causation and induction followed upon the early moderns’ anti-Aristotelian revolution. What replaced active powers was the idea of natural phenomena as essentially passive -- as inherently directed toward no particular outcome at all -- on which certain “laws” have been imposed from outside.
Read more

By gcallah - July 05, 2022
I once argued with a woman online — can you imagine? Me, arguing online! — Who claimed that global warming couldn’t possibly be due to human activity, because of the small amount of CO2 our activities release compared to the total in the atmosphere.  So I slipped her 500 µg of LSD, and said “Let’s see what small amounts of a chemical can really do!” Ha ha! It was online, so I could not do that. But imagine if she had never encountered ice but only water between 100°F and 32.5°F. I’m sure if I tried to explain to her that the next drop of 1° would make a huge difference, she would scoff, and say “No, the water is just going to get a little more dense and a little more sluggish.” Dynamical systems experience phase transitions, where a small move past some point throws the system into a whole new form of behavior.
Read more

By gcallah - September 15, 2013
Here . Meanwhile, more than 60% of their teaching staff are in non-tenured positions, with many making the equivalent of $12 per hour. But hey, there is no money in the budget to pay more than that!
Read more