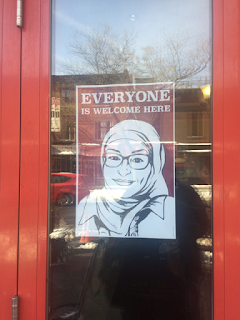 1) A policy disagreement (how much immigration should we allow from various countries) is being turned into a way to smear anyone who disagrees with the poster's preferred immigration policy as a "hater" who doesn't "welcome" certain people. And this is the way progressives handle pretty much all disagreement with their policies today: the person who disagrees does so because they are an evil racist bigot, not because they think progressive policies are often harmful.

It is not Muslim individuals that progressives welcome: they welcome the usefulness of the concept of Muslims as a hammer with which to attack traditional Christians.

The irony of it all is that the complete bursting of the progressive bubble (Trump is only a slight deflation compared to what is coming) is likely to come at the hands of Muslims: with enough Muslim immigration, Sharia law will be imposed. The progressives' sacramental abortion clinics will all be shut down, sex acts outside of the marriage between a man and a woman will be illegal, adulterers will be stoned, public modesty will again be a legal requirement, etc.*

It is like watching someone who hates the mice in his house so much that he is filling the house with leopards in order to get rid of them.

* And frankly, given the choice between living in the US as it would be if we had gotten eight years of Clinton, and living as a dhimmi in the US caliphate, I think I would prefer the latter.