A Confession: Why I REALLY Support Trump

By gcallah - July 09, 2016
Of course, of course, the true reason has to do with my racism and xenophobia, as with every single other Trump supporter. But my problem is actually even worse than that. To help you understand, let me describe my day for you.

I woke up at 8 to go to class, showered, and ran out to catch a cab. The driver was Pakistani. Of course, as a racist, I would like my world to be 100% white. But, as you will see, this mark of 50% was actually a high point in my day!

On the way to work, we talked and bonded over our mutual dislike of NYC bicyclists. Our at least appeared to bond: as a xenophobe, I was of course terrified the entire ride, and I pretended to laugh along with him just to cover my fear.

Once at work, I ran down to the cafeteria to grab an egg sandwich and coffee before class started. At that hour, there was only me and the five-person cafeteria crew there, a crew 100% Hispanic, and 100% foreign born.

The entire year I've known these people, I have hidden the abject terror I feel being around foreigners, and they actually greeted me with, "Hola, Señor Eugenio!" In fact, I speak with them in Spanish all the time, the better to cover up my horror.

Next it was upstairs to my classroom, where I was conducting an independent study, with only only four students, three Hispanic, and one black… and me! To make matters worse, the one black student also happened to be Jamaican, so foreign-born as well! You can just imagine the seething hatred and gut-wrenching fear I felt the entire time we shared the classroom, especially as they departed and said, "Great class Professor Callahan! Hope to see you in the fall!" Can you imagine: threatening me as class ended!

Then it was off to see one of the two Bangladeshi students with whom, all on my own, and for no pay, I have been running an independent project, teaching them Python and Django. Given my racism and xenophobia, it might make no sense to you that I would do this, but it will all come clear at the end of this post. We decided to get lunch together and discuss our project, so I suggested a new south Indian restaurant that had opened up a block away.

We got there, and what do you know: all four of the people working the lunch shift were Indian. Outnumbered five-to-one!

From there I took off for the spa down the street. Perhaps because of the composition of the neighborhood, the spa happens to have about a 75% black clientele. So what do you know: a few minutes later I found myself literally climbing into a giant bathtub with six black women, and once again, me, the only, lonely white person. (The spa clientele also happened to be 90% female today, I know not why.)

From there I jumped on the subway to head home, and was again a minority. When I got off the train, five hours had passed since lunch, so it was time to get some more food. I popped into this place: 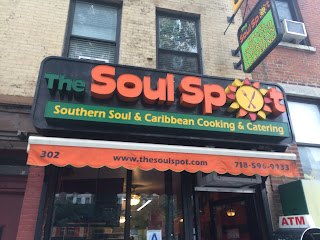 You may have guessed by now: once again, I was the only white person in the place, but now with like ten black people. I was such an insignificant minority that I might not even get my own slice on one of those demographic pie charts: I'd probably just have to share with "Other," and be all squished in together with who knows what shade of people.

But the full horror of my situation only came home to me when I arrived, well, at home, and realized... I am the only white person, out of five, living in my own apartment! I am a 20% minority even once I lock the door behind me in order to shut out the frightening, non-white world outside. Aaaaaaaah! Aaaaah!

And that is why I need Donald Trump: although I am a racist and a xenophobe, I am really, really terrible at being those things, and constantly screw them up. But Trump, I know he's a winner, and I'm sure somehow he can get me out of this terrible fix!

PS: This is a very typical day of mine, not arranged with this post in mind. It was actually not until I was leaving the Soul Spot that this post occurred to me.