Another strange claim from Stark 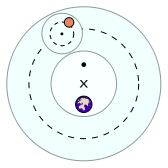 "To make his system work, Copernicus had to postulate that there were loops in the orbits of the heavenly bodies... However, these loops lacked any observational support; had they existed, a heavenly body should have been observed looping." (151)

What are we to make of this? Copernicus introduced epicycles into his system (Stark's "loops") precisely to get his system to fit with the observational data! The "observational support" was that, with the loops, Copernicus could predict where planets would be reasonably well, but without them he could not. When Stark writes "a heavenly body should have been observed looping," doesn't he realize that, for Copernicus, that is exactly what we are observing?

Of course, today, thanks to Kepler, we have a simpler system for explaining these apparent loops. Nevertheless, Copernicus introduced epicycles because they were the only way he could envision to explain the actual observations.